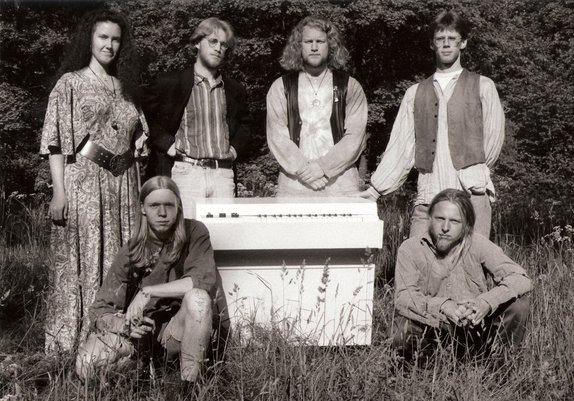 In the summer of 1991 Tord Lindman and Johan Högberg were looking for musicians with an interest for the progressive and innovative music of the early seventies. Thomas Johnson and Jonas Engdegård replied to their ads and eventually they met and listened to each others material. They became friends very fast and started writing and arranging songs immediately. In September after some convincing Mattias Olsson joined the group and Anna Holmgren joined Änglagård in the spring of 1992 replacing the previously engaged flute player. With their line-up completed the band played several appreciated concerts in their hometown Stockholm and around Sweden. In April they visited Studio Largen to record the last song on a demo. Earlier songs were recorded in the rehearsal room and the home of various band members.

The following two months were spent rehearsing and arranging the material for their first album "Hybris". The record was the result of not only four months hard work in the studio but the harvest of a one year struggle of creating music far from the commercial musical of today. The progressive rock scene raved about the album and eventually the band was invited to play at the annual Progfest in L.A. in May 1993.

The new track "Gånglåt från Knapptibble" was recorded in August 1993, because the English magazine Ptolemaic Terrascope wanted to release a single to come with the magazine. It was during a period of energetic flow that the song (which later formed the basis of "Skogsranden" from the "Epilog"-album) grew to something crazy and funny. In December the band did a mini tour in Mexico and U.S. where they played their own compositions as well as a couple of cover-versions.

"Epilog" was recorded in the summer of 1994. While "Hybris" featured some moments of somberness, "Epilog" finds this emotion intensified in an all-instrumental setting which is sometimes aggressive, sometimes contemplative and almost always heavy with wistfulness and stoicism. The music sometimes sounds closer to the band's Scandinavian roots than the more overt symphonic progressive of their first album. Flute and mellotron are both given prominent roles in defining the morose nature of the sound here, while electric guitar and organ are often at the forefront of the harder sections.

At this time the band was already falling apart. In November Änglagård headlined the first day of the Progfest in L.A., which would become their last concert. The band stopped rehearsing and writing. A year later they met again to edit the recordings made during the Progfest which were eventually released as "Buried Alive".

2002 saw the band rehearsing again, without Tord Lindman, though.

After countless rehearsals the band finally returned to the stage in June 2003, playing a highly anticipated headlining show in their hometown Stockholm. Eventually they appeared at the German Freakshow-Festival and at NEARfest in the United States, both a huge success for the band and an unforgettable experience for the audience. After a few more shows in France and Belgium, Änglagård took a break, focusing on their jobs, families and other musical activities. Meanwhile, "Hybris" and "Epilog" were re-released once again.

2008 Jonas, Johan and Anna started to work again. Shortly thereafter, so also joined Thomas. At the end of arranging that was also attended by Tord a very short period. But he did not feel like working on. 2011 sees the band back together with Mattias. They began rehearse and recording a new album that will contain the two new songs played in 2003 along with some brand new material. The band returned to NEARfest in 2012. The new studio album "Viljans Öga" has been released in June 2012.

Änglagård band members have recently varied somewhat. It's a bit like getting new play mates or new family members.

Maybe one day we will be a really big band.